What exactly is a safety light curtain? 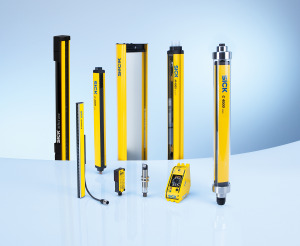 The safety light curtain is relied upon to protect factory personnel all over the world.  Although the technology was developed almost 70 years ago, many manufacturers are not taking full advantage of its capabilities. The value of light curtains is greater than many realize, having functions and features relevant for machine safety, factory control, and productivity.

The safety light curtain has become so ubiquitous, that it is all too easy to regard it as a simple ON/OFF device – a fail-safe, fit-and-forget substitute for protective fencing. However, an expanding and versatile range of light curtains have evolved to perform multiple functions and can contribute positively to productivity and integrate with a factory’s local area networks to support more effective plant-wide automation.

History of the Light Curtain

In 1951, Dr. Erwin Sick presented the first wooden model of his light curtain to the German Inventor and New Development Trade Fair in Munich, Germany. He received a certificate for “exceptional creative performance.” Later the same year, a patent registration of the light curtain based on the autocollimator principle was regarded as the technical breakthrough that began the development of technology we know today – one that has saved countless people from injury and death at the hands of dangerous machinery.

Since that time, hardware and software development have transformed the versatility and use of safety light curtains. The key attributes of the light curtain remains the same, but its potential may still be under-exploited.

There really is no such thing as a straight, one-for-one, off-the-shelf ‘menu’ of the safety light curtain. All manufacturers offer their own varieties, including different sizes, shapes, and resolutions. However, the starting point of any safety application is always the hazard you want to protect your workers from and the space the hazard is in. But, there are different attributes to consider regarding the physical properties of the light curtain.

Currently, ISO 13855 and ANSI B11.19 are the primary standards utilized for positioning safety light curtains. These standards can assist in determining which of the physical attributes to select and what main specifications to consider. However, there are also additional properties like IP (ingress protection) rating, according to IEC 60509, current consumption, and visible indications that are not covered here.

Choosing the correct range ensures that the light curtain is the best fit for your application. For example, if a high power, long range device is used over a short distance, reflections off nearby surfaces may make the installation unsafe. On the other hand, a long-range device may be required for protecting large areas that require high-beam strength and sensitive detectors. 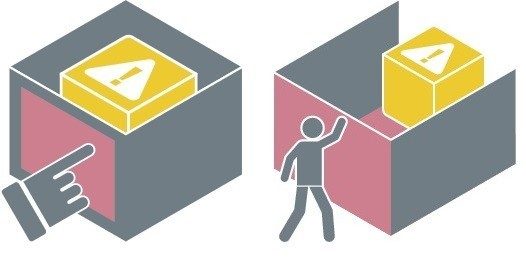 The resolution of a light curtain can also affect the mounting position with respect to the hazard. The terms finger protection and hand protection are used often, referring to resolutions of 14 mm and 30 mm respectively. However, the light curtain can also have other resolutions (e.g. 20 mm, 40 mm, 200 mm, etc.). The refined the resolution (capable of detecting smaller objects), the better the detection capability is for a safety light curtain. This makes it so the device can possibly be mounted closer to a hazard (i.e. the reach through distance for a 14 mm resolution light curtain is smaller than that of a 30 mm resolution light curtain). However, this does sometimes come with a tradeoff in an increase in response time, depending on the make and model of the light curtain. ANSI B11.19 explains different calculations for minimum mounting distances based on effective resolution, but the basic equation is shown in Figure 2. 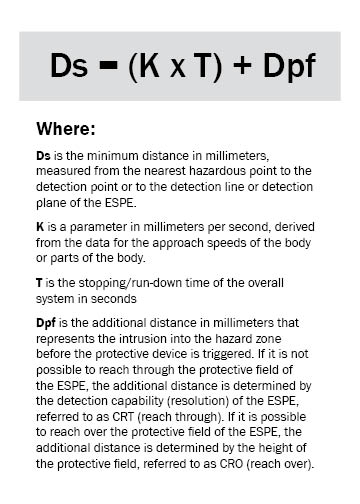 For larger ranges or applications for arm/body detection, a device with beam spacing of 400 mm mm is normally sufficient, but additional risk reduction measures may be required for continuous presence detection to prevent the machine from being reset while a person is behind the light curtain. A thorough risk assessment according to ISO 12100-2010 or ANSI B11.0-2020 should be performed to take these points into consideration.

Higher resolution light curtains are usually more expensive than lower resolution devices. When minimizing safety distance is important, the tradeoff between response time and detection capability should be fully evaluated.

When choosing a safety device for an application, various standards can be used to design the safety related parts of the control system (SRP/CS), including ISO 13849, IEC 62061 or ANSI B11.26. Following the definition of a safety function (e.g. initiating a stop using a light curtain), it is important to determine what performance level (PL) or safety integrity level (SIL) the associated SRP/CS should achieve based on the risk.

The safety light curtain type is directly related to the highest PL/SIL the safety function can achieve and is defined by IEC 61496. The following figure reflects the relationship, see Figure 3.

Mirrors reduce the strength of an optical beam and therefore active/passive systems will normally have a much shorter range than sender/receiver systems. See Figure 4. 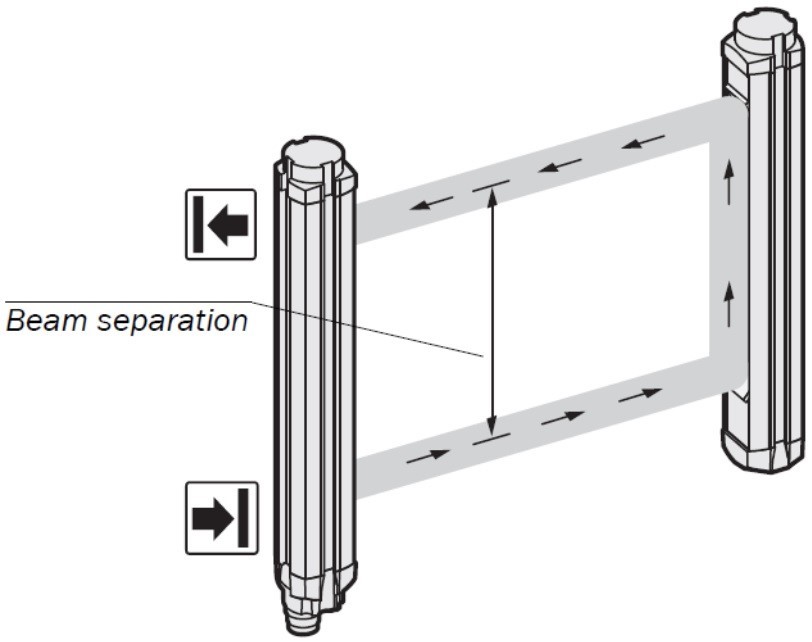 The simplest function of a light curtain is when light beams are obstructed and the outputs turn off, which signals a stop to the associated hazardous movement(s). If no incident has occurred and the area is safe, a reset can be performed.

This stop/start style of safe operation can be disruptive to factory flow and productivity and therefore the light curtain has evolved over the last half century to perform multiple functions, such as internal reset, external device monitoring (EDM), beam coding, and blanking.

It is important that an automatic restart can only be used in specific cases when it is not possible to stand behind the light curtain without being detected (e.g. small press with arm only access), as shown in Figure 5. Further requirements may also apply.

A manual reset can signal may be processed using either an external safety relay, safety PLC or internally, if the light curtain has the capability. Before safety PLC/relays, the reset was performed using relay logic.

The level of safety performance for a safety function can be increased if fault detection is implemented. The standards ISO 13849 and ANSI B11.26, used for determining the safety performance of a SRP/CS, describes the term diagnostics coverage (DC) to measure this capability. It is a measure of how many dangerous failures are detected.

One method, listed in these standards and used extensively in industry, has a diagnostics coverage of 99% (can detect 99% of dangerous failures) and is called External Device Monitoring (EDM) or “check back.”

This monitoring function is a means for a safety device to actively monitor the state of external devices it controls, such as machine primary control elements (MPCE’s), contactors or relays. This is necessary because the external devices usually have no diagnostics of their own and are pretty much considered “dumb” devices.

If an unsafe state is detected in the external device, the safety device can ensure a safe condition. This is performed by monitoring complementary channels of the external devices which are physically linked internally. If the outputs of a safety device go high, the returning EDM signal from the final switching devices must go low if the system is in a safe condition. Otherwise, there is a fault. See Figure 6 for examples of implementation in a safety relay and directly in a safety light curtain. 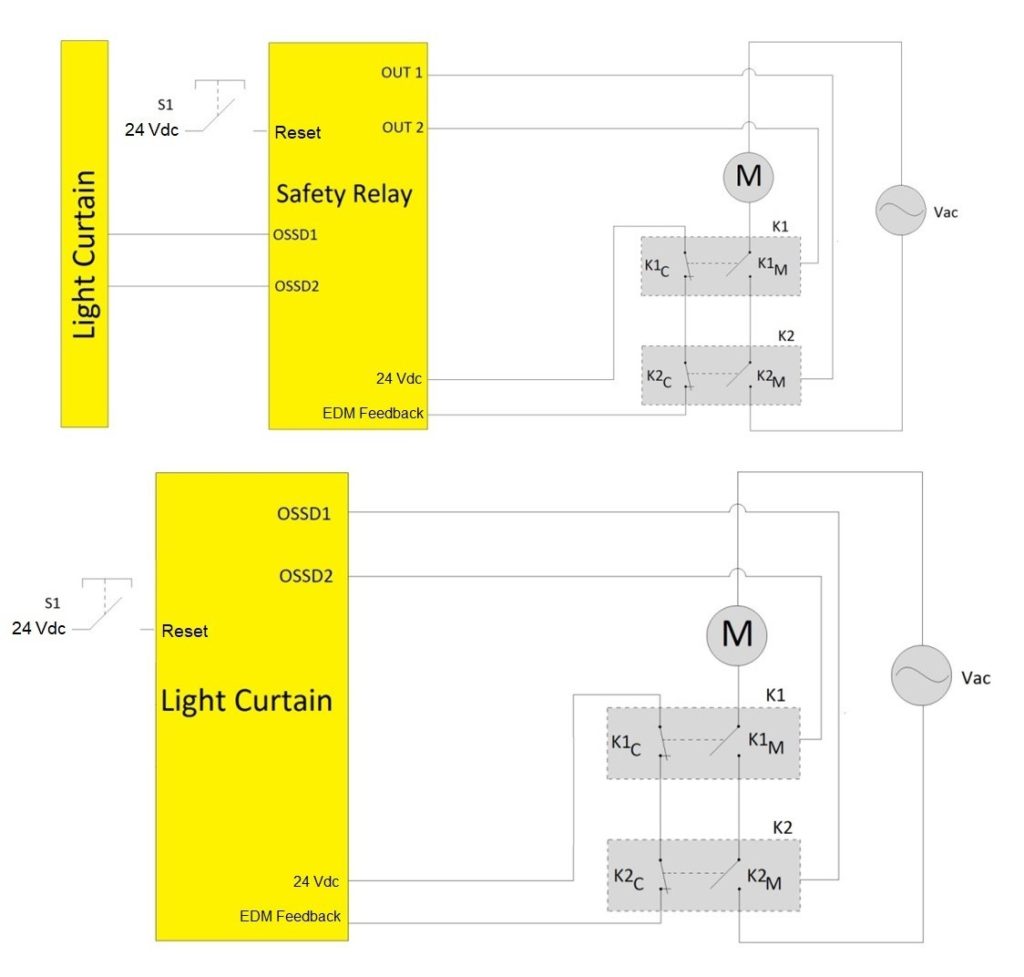 Figure 6: Two example of the implementation of EDM 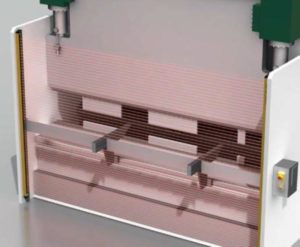 In some applications, it might be desirable to permit certain objects to protrude through the light curtain field without signaling an obstruction of the detection zone. For example, when using a support table or rack required to feed the machine with a heavy work-piece, a blanking feature can be applied to modify the detection capability of the light curtain and not interrupt the work flow. The blanking can either be fixed or floating to allow a variable position for the object. See Figure 7.

In many applications of light curtains, a light curtain must be able to allow objects through whilst still reacting to presence of people. This is particularly important on conveying lines with goods passing from one area of production to another or in automated warehousing operations where staff are excluded from the automated stacking and shelving areas.

Sensors can be used to identify the object (such as a car body) and allow passage in to a hazard zone due to the shape and size, while still detecting presence of a person. This is automatic and known as muting. The two most popular methods of muting are cross beam and four sensor muting, as shown in Figure 8. 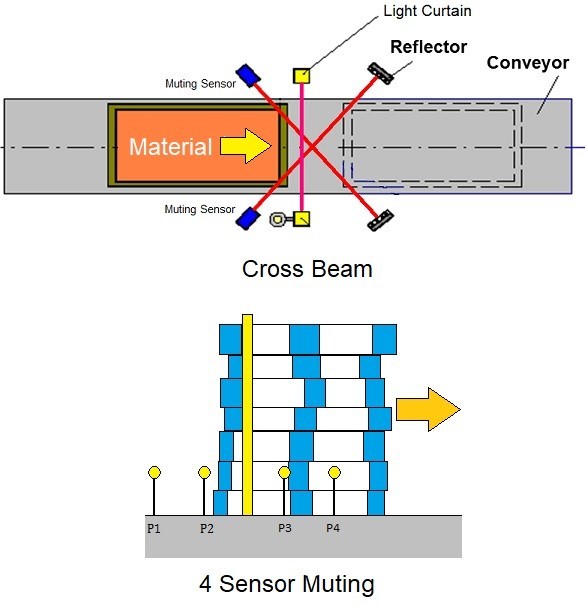 However, there are many different methods of muting, including the use of photocells, ground inductive loops, safety laser scanners, and sensing field switching as discussed in a separate white paper. The standards IEC 62046:2018 and ANSI B11.19-2019 can assist in the application of protective devices to detect persons. It is important to understand, however, that muting is not the same as bypass.  Muting is automatic; whereas bypass is a mode selected manually by an operator while other protection measures (e.g. enabling device) are in use.

Another term related to muting is override, which is a manual operation required after an error in the muting conditions. This is needed to make a system clear, like when a pallet is stuck in the detection zone of a safety light curtain that has stopped the conveyor and the conveyor temporarily needs power to remove the pallet.

There are some safety light curtains that can perform complex algorithms on individual beams. This means that not only can it detect if the beams are obstructed or not, but also which beams and in which sequence.

The light curtain can safely detect patterns, objects, and direction, maintaining the safety while still allowing known patterns to enter and leave the detection zone of the light curtain. Furthermore, it does not require any additional sensors or control. This powerful function can dramatically increase availability and increase safety while at the same time as allowing material to pass through. The C4000 Fusion is an example of such a device. See Figure 9. 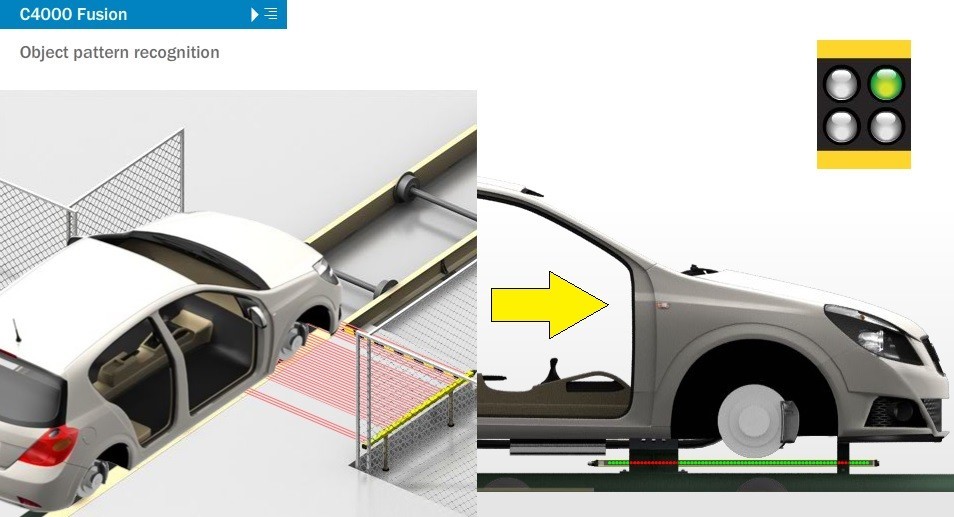 To overcome this, some safety light curtains offer beam coding so that a receiver can distinguish the beams from a specific transmitter and not be affected by another device in close proximity. When beam coding is activated, however, the response time and/or range of the safety light curtain may be affected and should be taken into account as this may affect the minimum safety distance.

Today’s light curtain installations are much more attuned to production needs. They are capable of a wide range of manual and automatic functions that ensure a light curtain assists safety and productivity without sacrificing efficiency.

However, it is important to know what features and functions are available with safety light curtains and also if the features are required for the application. It is extremely common for light curtains to have many features that are not used. The application of a light curtain isn’t always as straight forward as sticking it in front of an access point and further thought may be required.

Interested in learning more about how to implement safety light curtains effectively in your operations? Contact a SICK Safety Services Representative today!